As part of my return to actual physical synthesizer use, my last investment was into a shiny Kurzweil K2600XS. Yes, the big beast, with seven-octave keyboard and sampling option. And yes, unlike the successor PC3, with sampling option, allowing you to process input live with the sampler, the synthesis options and the KDFX effects.

Now that synthesizer is above any possible discussion or critizism regarding its synthesis power, and also its role as a very efficient and sensitive keyboard; an optimum choice for master keyboard use, and I have been more than happy with it in both regards. However when I powered it on the first time, the noise struck me as very annoying immediately.

Seems that the noise comes from the Kurzweil’s built-in fan, and it’s really rather loud. How loud you ask? I’d answer “louder than a high-powered desktop computer with server harddisks, a Core-i7-920-powered laptop and a noisy city street through the window together”. Checking through some Kurzweil-related forums (e.g. that one), I found that this was a problem of the device in general, not only of mine: people usually advised agains just disconnecting the fan, but reported good experiences with replacing it.

So how to replace it? The good news is that the developments in computer technology – steadily rising heat dissipation due to higher integration and clock speeds, a market for “silent PCs” and finally that odd cult called case-modding – really played into my hands here: opening the web page of a local electronics store, I found fans with a specified sonic rating as low as 10dB. Now 10dB, in case you wonder, is roughly three times as loud as something you’re just barely able to hear – in an anechoic chamber. It’s also about 1/4th of the noise level of a very quiet room, or roughly the same of someone breathing very quietly.  All in all, it’s quiet enough (check here for some unreferenced examples of noise levels, and keep in mind that every 6dB more means twice as loud, so e.g. 24dB more is sixteen times (!) as loud).

One guy in the aforementioned forum cited a form factor of 80x80x25mm for the Kurz, claiming that “a height of 30mm should also fit in”. So I went to the store and got an 80x80x25mm fan specified at 10dB and at a price of €9.90. The name: “Noiseblocker Black Silent Fan Ultraquiet”.

The official Kurzweil specification from the “harddisc installation kit” provided just the information I needed to take the thing apart. I decided to place it on my bed (to be able to flip over things at will without having to worry getting scratches on the display or damage to levers or wheels). 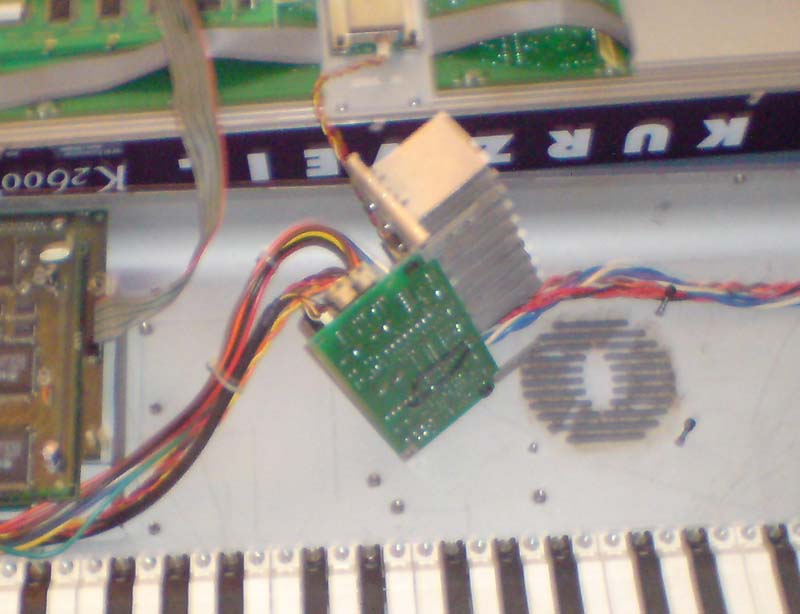 Removing the fan requires removing the power supply electronics first, which is done via four Philips #2 screws (note that you may need some kind of extension when using a powered screwdriver, as two of the screws are situated next to the heat sinks), then the fan itself is removed with four more screws and disconnected from the power supply via a small jack.

Now measuring the dimensions of the original fan, I found that it’s actually 90x90x25mm. Now is that a problem?

Now the fan lies below roughly 1/3 of the length of the heat sink, sucking away the hot air from there. As heat sinks, by design, have a very good heat conductivity, reducing the surface “sucked onto” by 1/9th shouldn’t be a problem here. Also, as the curvature of the fan is actually a little steeper for the smaller radius, it’s also ensured that the smaller fan fits well with the grille below.

The only point of concern may be that you’re only able to use one of the four screws to attach the fan to the flange on the K2600s case. This can be worked around simply by using a sufficiently thick piece of sheet metal (e.g. 2mm or above) of about 100mm in length, drilling two holes in it at 90mm distance and then use that to fix the fan in place (that’s what I did). 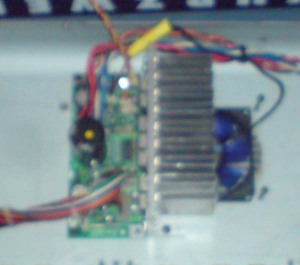 Now putting the fan in place is one thing, attaching it electrically another one.

Most of today’s fans have three wires opposed to the two of the Kurzweil’s fan: the third wire is used for regulating the fan speed. Fortunately, simply keeping that one unconnected works pretty fine, making the fan run at full revs all the time (which is just what the old model did, only at much higher noise level). Unfortunately, the jacks don’t match, and also the crimped wire ends don’t match the jack.

I helped myself by simply cutting open the wires of both fans and quickly soldering the black and red wires of the new fan to the corresponding wires of the old jack.

Reassembling the thing and putting the K2600 back together was again a breeze, also thanks to the very helpful instructions in that specification I mentioned before.

Now for the big test: how does it sound? Turning it on, I simply notice: no noise. I quickly turned off the computer, listened again: no noise! I put my hand below the ventilation grille in disbelief for fear of having mixed up the connection of the new fan – yes, it’s blowing all right.

So for a quick summary: If you happen to own a Kurzweil K2600, have ever been unhappy with the noise of the fan, and know how to at least open some screws and solder two wires together: get yourself a fitting (again: 90x90x25mm) low-noise fan (as I mentioned, they’re available with specs down to 10dB, and invest roughly one hour for continued years of silent bliss!