Yesterday, Cubase told me this: 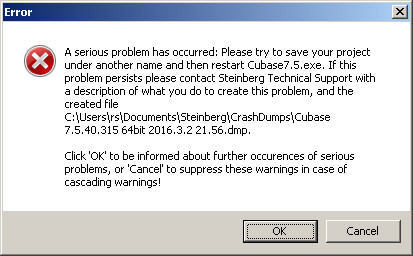 What had I done?

In the project for Erlanger Programm, I had tried to open the folder for the b part.

(For those of you not familiar with Cubase: you can arrange tracks in your project view in folders, which you can then open and close, thus allowing you to make your screen a little more tidy, especially if the track count exceeds 200 or so).

And before that, nothing big – except for working on sound design tasks for close to two hours.

@steinbergmedia Cubase has seemingly destroyed my big project. This is unacceptable.

To which Steinberg offered a reply quickly:

@moinlabs Hello, please contact support they should help you reconstruct your project, you might want to consult our support forums as well.

Somehow, I was able to work around the issue so far. However, this is a new item in a line of events in using Cubase with a somewhat bigger project – with which it can’t cope.

To contextualize Steinberg’s claim “Cubase helps artists, producers and engineers around the globe to create projects a whole lot easier.“…

That is true…as long as your music is tiny pop songs or similar.

2 thoughts on “Erlanger Programm – Lack of Progress by Unsatisfactory DAW”