A few weeks ago, I did finally greenlight the analogue signal chain album project I have been talking about here quite a lot recently.

It will be called More Than Moore.

Somewhere down the road, I shall do a synthesizer-music album using an analogue signal chain from the first signal sources to the final artifact (which is the thing you’ll be listening to). Along the way, the number of tape generations shall be minimized (at maximum, the tape you’ll get is a 1:1 copy of the master tape, which in turn was recorded directly from the synths).

I don’t know when I’ll be done.

It’s all about the gear…

Of course it’s about the gear – for decades, unless we’re a very specialized professional with a hugely expensive studio, everything from synth sound generation over effects, mixing, mastering and intermediate/target media was digital. Sure, there’s analogue summing, vinyl and cassette releases, and let’s not forget analogue synths, but one portion typically was digital.

In my special case, I had switched to DAW-based recording exclusively for studio stuff more than twenty years ago (in 1996 to be precise), to computer-based mixing an processing in 1999, and finally in 2006 also the live stuff had moved to a portable computer.

Which means while I have fancy audio interfaces, DAWs, some great digital outboard boxes and even a digital console, I lack all of that in the analogue world. Read: one or two small rack/desktop mixers, one or two compressors, and that’s about it. Digging deeper, there’s also a truly high-quality tape deck (the top model of the last generation by Pioneer, back in the day when those things were still being made in quantities), and I have ready access to a similar one (Teac), But then, we’re done. No reverb. No delays. No gates, Hell, not even a proper mixer. Or EQ.

On the other hand, when it comes to the synths, I’m pretty well prepared: between Elektron Analog Rytm, DSI Tetra, Waldorf Pulse 2, Oberheim Matrix-1000, SCI Sixtrack, Arturia Minibrute, Korg Volca Kick and a small A-100 eurorack thingie I’m happy that I can do what I want and need to do.

For a typical project – say, one of my more recent albums like Erlanger Programm or oscillator theory – the decision to “greenlight” it simply means that I stop goofing around a little and finally start to at least put the basic ideas of the project somewhat into shape. All in all, it means I make a decision to put a considerable amount of my free time onto that idea, and while that is not exactly a resource that’s available abundantly, it at last means I don’t need to pay money for it.

This project, therefore, is different. The moment I greenlighted it was the moment I decided to pick up a second-hand Mackie 32*8 console.

A console with 32 inline input channels (make no mistake: I’m gonna need all of them), eight busses and six auxes (albeit only four accessible on any channel at any given time). I may rework the Mix-B functionality to give me a post-fader stereo effects send (the way it’s done, it’s pre-fader, but there’s a mod described in the manual).

There’s things I had quietly taken care of before, and these concern effects. There’s four bucket-brigade delays (and I may even get more of those) and a distortion stompbox, and I still need at least a chorus, one or two reverbs (right now, I’m thinking about a DIY plate reverb and an affordable spring reverb), and I may also get something phaser-ish (love those on a hihat).

There’s the typical outboard stuff: I need an EQ (all I have is a single-channel one), and compressors, and gates. Regarding the latter two, I already got an assortment of Alesis 3630, BBS compressors and Drawmer gates, and while at it, also replaced my ailing DI800 active DI, only to discover later that the original one was in perfect working order – but in that setup, I don’t think there’s too many DIs.

And by adding a Ringmodulator Eurorack module, I finally cracked the small form factor of my A-100MC case. More to come? A MFB Cymbal module might be nice. 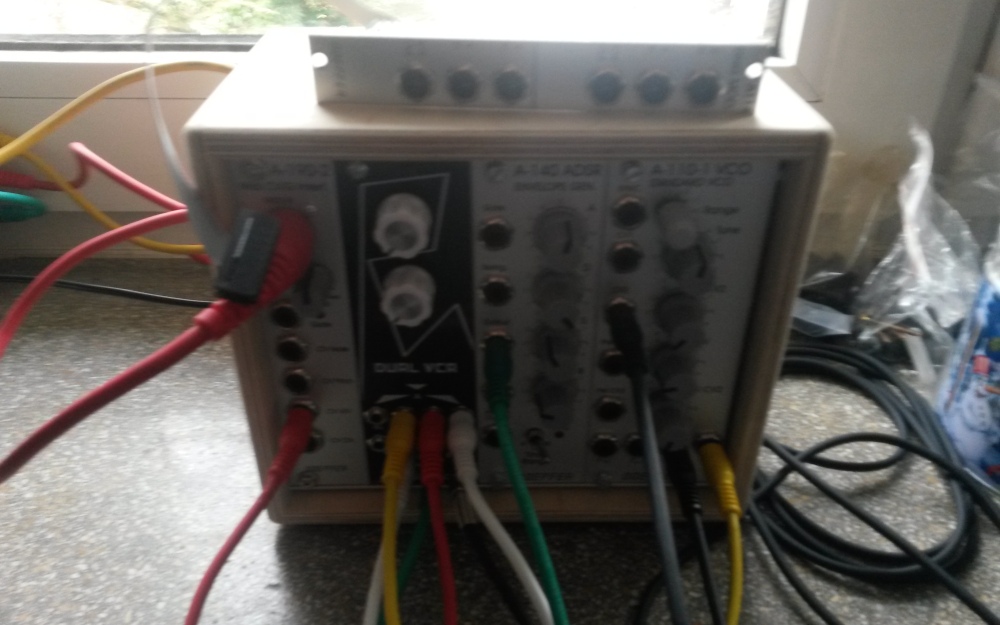 All is Gear…or is it?

Yeah, so we have the gear, then what?

Today, there is neither an overarching concept (like there has been for my last two albums, one of which was also synth-only), nor are there completed tracks ready to be recorded. There is, however, a collection of many ideas, and also inspirational places I’d like to revisit.

First of all, there’ll be a synth version of an Eclectic Blah track of old, called Elektrik Kolada. As Jan Kühner had been defining the melodic content for this one when it was originally recorded, I might as well ask him to play his MIDIfied guitar for me. There’ll be something in the general direction defined by some of my recent publications. I might just include this cover version of a truly stunning composition. There’ll be something in the no-input/noise realm, and then…I don’t know.