Regarding that RPM Challenge, I did make some progress since I last wrote about this.

Yes, my file server is still down. Well, it can do things locally (like stream my music library), but I can’t access it from another computer for getting actual files. Which has to do with the wicked Kerberos. It’s just as well; if I really would need something, I’d just have to copy it to a stick.

On Friday, I recorded my commute to a professional training (which I did by car). Tomorrow, I’ll do the same on public transport. And I’ll record some things with the H2 thingie suspended from the ceiling and swinging around. How is that related? Swinging around like a pendulum and commuting is the same verb in German (pendeln), so that makes a connection via an extra-musical narrative.

The few notes that somehow form a melody started to grow into something, and so I decided to turn it into a proper theme, which goes with chords. And record those chords with an acoustic guitar. 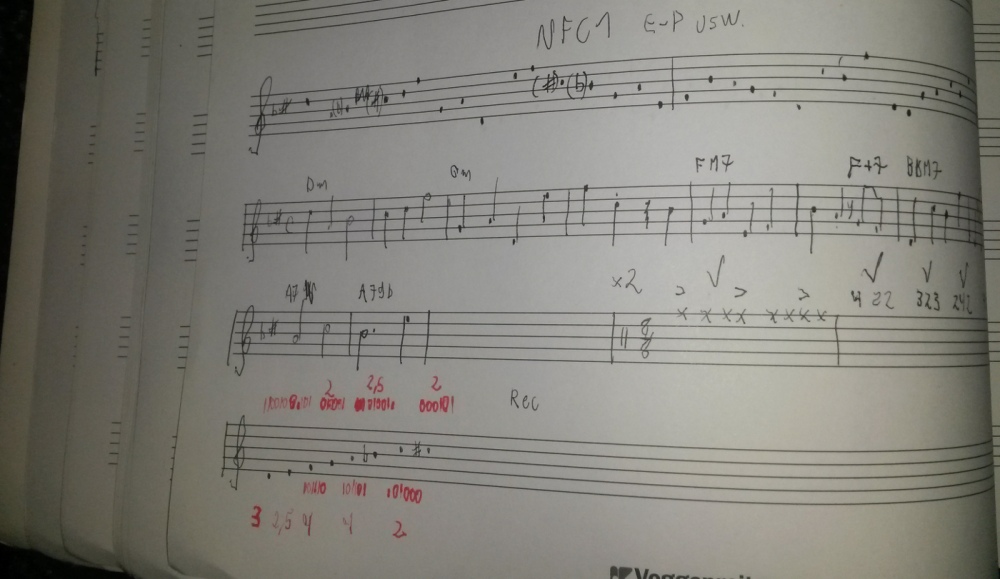 All of my acoustic guitars were considerably out of tune (like a drop C tuning), so I decided not to do it. Fortunately, my main electric guitar was halfway in tune, so I picked up one of my bass guitars and recorded some notes through a driven tube pre to use in Kontakt. What’s the logical connection you ask? There is one. 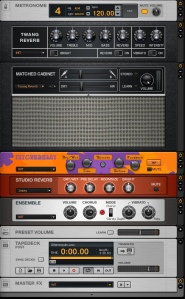 Next, the electric guitar. I decided to start up Guitar Rig (you recognize the underlying “use RPM challenge to familiarize yourself with Komplete”, right?). Back in the day, I often found that a nice effects setup can result in something happening, so I used a clean, jazz-guitar-style preset, added heavy chorusing and a delay, and started to play. And did it again, because I didn’t understand how the built-in recorder worked.

What will I do with this? That’s a decision for later.

And the acoustic guitars will be recorded at a later date, too. Without tuning them. After all, this project is about doing odd things.

Using the guitar melody from above, I sat down at the electric piano (which is in fact the Kurz) and wrote a bass ostinato to go with it.

Next: percussion. I had thought up some rhythm originally to be played with an (acoustic) ride cymbal, to then be combined with electronic drums (oldskool analogue). I then opted to use a shaker instead, which makes things easier, because I have one and can record that myself.

Or so I thought. The shaker wasn’t to be found. Fortunately, I had already put “household items” into the list of instruments to use, so I was able to use the shaker. Five different rhythms set against each other through a transient designer. That could be fun!

Recording the tube. And maybe acoustic guitars. Building instruments in Kontakt. And doing wicked effects stuff with the piano thing from Thursday. Or something else.

One thought on “RPM Challenge: Progress”