Here’s the idea? Can you somehow replicate a semi-modular synth with individual modules? And if so, how big and expensive will it get?

I won’t be considering why one might want to do that. Consider it more of an exercise in things modular (synth).

Here’s a disclaimer: modulargrid.net is awesome! I’ll be using their screenshots that can be easily created there. If you have a modular system, go there!

Taking a few semi-modulars I’m familiar with, I’ll try to replicate them with individual modules in two different ways. First, I’m gonna try to see if it’s possible using the modules I have. Failing that, I’ll have a look if it’s possible with other readily available modules.

I won’t try to recreate the sound 1:1, rather the general architecture, functionality and feature set.

As for the contestants, I’m gonna use the semi-modulars I have: Nanozwerg, 0-Coast, Neutron, DFAM.

The only one of the contestants I haven’t reviewed (yet). This is also the only synth that doesn’t come in a case of its own. In a width of 24TE, it houses one oscillator plus sub, noise source, a multimode 2nd order filter, two ADSD envelopes, one LFO, portamento, and a MIDI in. While the envelopes and the LFO are digitally created, the entire audio path is analogue.

One nice detail is that all the synth’s parameters can be controlled via MIDI.

For the modulation sources, I’ll start with my go-to components: a Doepfer A-140-2 Dual ADSR and a 2hp LFO. For the oscillator, the only one I have with a sub is the Intellijel Dixie II+. For noise, I have a choice between the Kinks and A-118 – as the Kinks is smaller, I’ll take that. For MIDI, I’ll take the A-190-2. Which leaves the filter: there’s only two real multimode ones (read: LP, BP, HP and Notch), and one of them is smaller, so the A-124 WASP it is.

As we need to be able to combine one oscillator waveform with either the sub or noise, we need a mixer. And we need Portamento. And something for filter tracking. We’ll add a 2hp Mix and the LPZW WK.2 and are done.

The Nanozwerg is really a pretty small device, and it was clear that it wouldn’t be easy to beat that: with our system, we end up at 40TE, 16 more than the Nanozwerg. 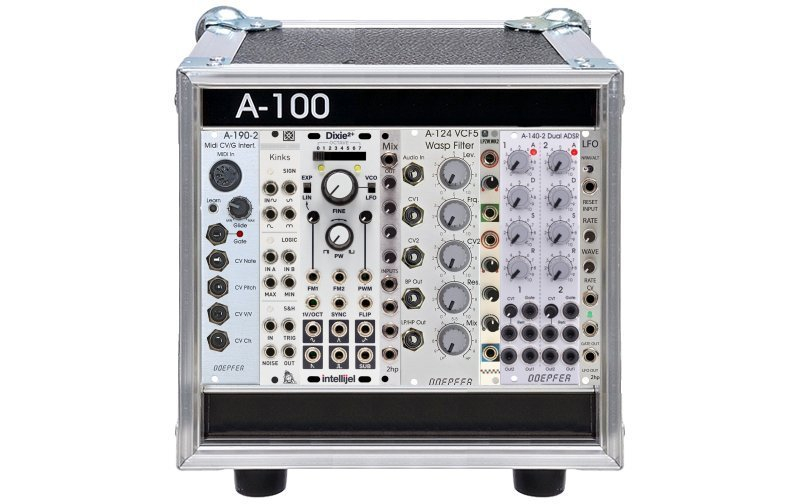 Feature-wise, we’re off pretty well: things we can’t do are limited to MIDI parameter control and using the LFO in one-shot mode. To make up for it, we get vastly more powerful envelopes (including CVT option and a dedicated release section), a more powerful oscillator, and an otherwise much more powerful LFO. And we can mix multiple waveforms. And patch much more wildly.

As for the price: the Dixie II+ costs about the same as the whole Nanozwerg…

While the MFB was the smallest module, the Behringer is the biggest with a width of 80TE. Maybe we get a chance to cut below that. On the other hand, it’s a Behringer, so we’ll have a problem beating the price.

Feature-wise, key aspects are two oscillators, 2nd order multimode filter with two outputs at once, 2 ADSRs, one LFO, noise source, BBD delay, distortion, and a bunch of auxiliaries: two attenuators, one summer, two slew rate limiters and one S&H with dedicated clock. And again, we get a MIDI interface.

For oscillators, I’m gonna pick a pair of A-111-3. I’ll stick with the same A-124 WASP filter as before (knowing that I can’t have separate outs for low- and highpass that way). Following in the audio chain, I’ll add the Synthrotek 308 distortion, and end with the Doepfer A-188-1D together with the 2hp LPF as its clock-filtering companion.

I’ll also use the Kinks again (for noise and S&H) and add two 2hp Mix for all the oscillator and noise combination duties. For the slew rate limiter it’s the WK.2 again – leaving me one slew rate limiter short. And one attenuator. I’ll also add an Intellijel Unity for summing, and use one of the Black Market Multiples for the multiple. Finally, the A-190-2 covers MIDI duties again. 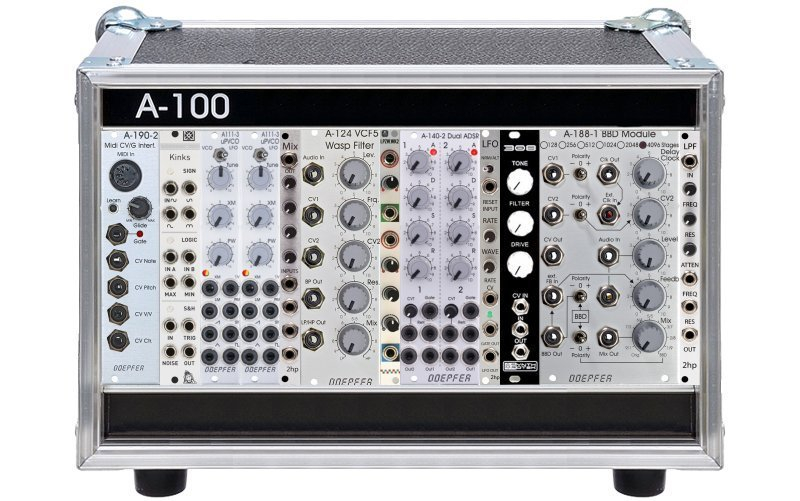 Interestingly, we end up at only 60TE this time, i.e. 20TE (or 25%) smaller than the original, and could even go below that with e.g. a Synthrotek DLY for the delay. With regard to the price, things stay pretty much the same: the two oscillators alone cost more than the Behringer.

The Moog has a proper, analogue sequencer. Otherwise, all the components are extremely primitive. There’s two oscillators which produce either triangle or square, three envelopes of the most primitive AD kind, and a noise source.

Going with the SQ-1 for the moment, we’ll end up with a system that is above (if not so much) the DFAM both in size and cost: the described system will eat 70TE (as opposed to the DFAM’s 60), and set you back over 700 bucks (including case).

Now you could argue that the system we designed just now is vastly more powerful than the DFAM. That is true on one hand: we have far more powerful envelopes and oscillators. On the other hand, we’re still lacking the option to modulate noise and FM amount (which in the end would cost us another VCA).

Let’s ignore cost for a moment and just look at size, using a lot of 2hp components (because they are so small): we need 3 VCAs, noise source, two VCOs, mixer, three envelopes and a filter – which makes 20TE, i.e. together with the SQ-1 we’d be the same size than the Moog (but vastly more expensive, if also more powerful). 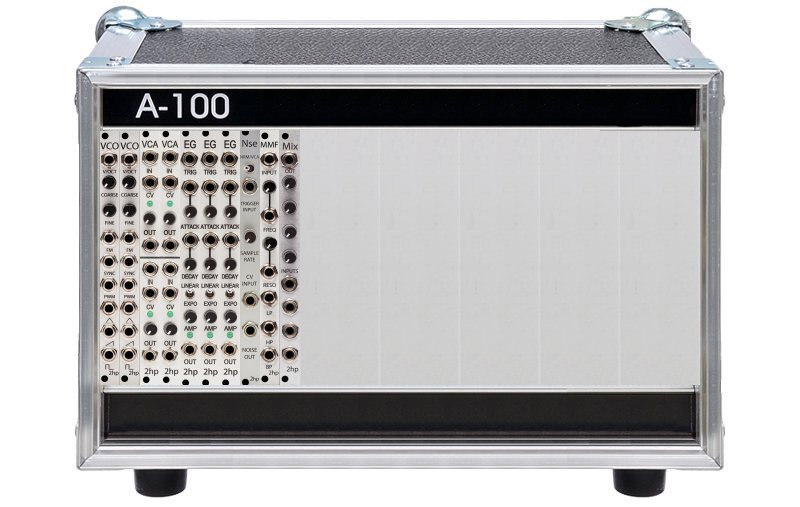 For this one, the approach began for me to truly understand what the 0-Coast does. There’s a MIDI interface, which can be a two-channel MIDI-to-CV/gate and a lot more, or the second output pair can be used as a digital triangle/square LFO. Then there’s tap tempo, a kind of S&H waveform, a summer/attenuverter/multiple (so far, the CTRL section), a LPG (DYNAMICS) controlled by an ADSD envelope (CONTOUR). Then there’s an AD envelope which can loop (SLOPE), and a triangle/square oscillator (OSCILLATOR) integrated into two further components called MULTIPLY and OVERTONE.

OVERTONE brings in additional overtone from, at the very left, a version of the triangle almost looking like a sine. In that respect, it’s not too dissimilar to oscillator designs where you can blend over the different standard waveforms. In the last part of travel (the manual says after the EVEN position, but it seems it starts somewhat further) the slope signal is brought in (added?). OVERTONE can be controlled by one knob and has a CV in with attenuverter.

MULTIPLY sounds inconspicuous enough: we know what multiply is and does, e.g. from the talk about VCAs or about ring modulators. This implementation can use one input signal (which is the one coming from OVERTONE) and distorts it as you turn the knob, and you can change the amount of distortion with a CV in with attenuverter normalled to the SLOPE again. This allows for modulated sound character for low SLOPE rates and full-blown AM at higher ones. If by using the attenuverter you create negative input, you can also mute it. I guess you can do something similar with a distortion plus a VCA.

I’d be starting with the A-111-3 oscillator special weapon again, and am already at a loss how to do the CV-controlled blending. I’d use a A-184-2 VC crossfader, which also adds a triangle-to-sine converter, and is small and affordable (4TE, €82). I’ll be thinking about how to bring the SLOPE into the OVERTONE section later.

For MULTIPLY, I’ll just use a distortion (Synthrotek 308) that’s always fully cranked and put a VCA before it. Let’s later think about details of the SLOPE interface.

SLOPE…the easy way out would be to use Makenoise’s FUNCTION module, which (at 8TE and €169) does just what this thing does, and a little bit more. Another approach (also not using something I already have) is Doepfer’s A-141-2 Dual VC ADSR/LFO, which has the added advantage that I could also use its other half for CONTOUR.

Finally CTRL: I can do all of its non-digital part with another one of my secret weapons, the LPZW WK.2. For all the digital stuff: I’d need in the end two channels of MIDI/CV, an arpeggiator, a digital LFO, and that added S&H signal. At this point, let’s note that I won’t find a simple (i.e. small and affordable solution) for all of this and simply fire my last remaining secret weapon: Disting. 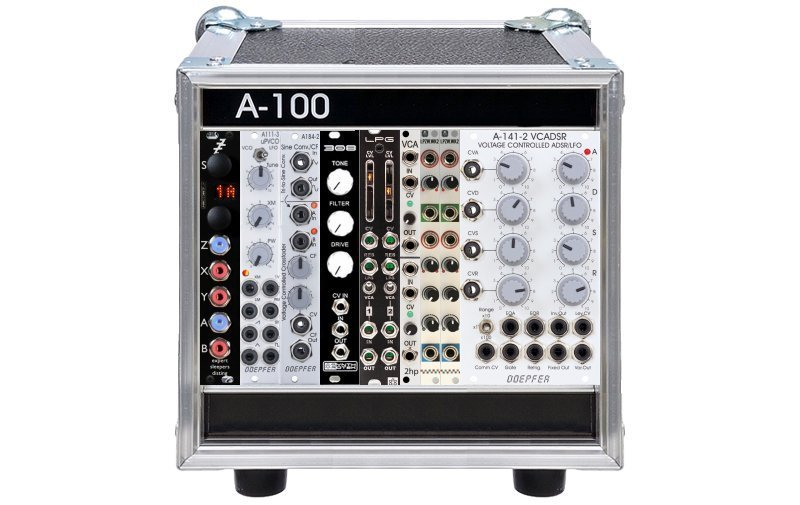 We end up at 40TE (which is actually smaller as the 0-Coast, which if you mount it in a rack, takes up at least 44TE), and a price tag in excess of 1k.

This was an interesting experience for me! Let’s try to sum up the key findings here:

Breaking it down to the four competitors:

And with all that being said: it would be interesting to try and put something like this together and do a comparison how they sound!