The canon is one of the oldest contrapuntal musical forms, with early handed-down examples from the 13th century. Popular examples include frére Jacques and the multilingual Der Hahn ist tot, musically more challenging examples can be found in abundance in the Goldbergvariationen.

All of these examples have in common that they not only are, but also sound like, a contrapuntal musical form, i.e. you immediately perceive it as several voices.

But what would happen if you used a melody comprised only of whole (or half, or quarter) notes, and also the different voices start only one step apart?

The idea was that this would sound like a succession of chords, much like a very trivial homophonic chorale. To make things simple, I opted for a three-voiced canon, so we end up with triads.

To make things more interesting, I opted to make a theme that modulates, so you need to play it several times to return to the beginning (or an octave of it).

In this setup, each chord differs from the previous one by at most one note (exactly one if there are no repetitions in our theme). Such a voice leading is an early exercise in harmony courses (e.g. “go from Db to Gm with only one note changing from chord to chord and ending in a cadenza”).

If we would limit ourselves to standard (root, third, fifth, major or minor) triads, the options are rather simple. Taking a Gm chord as an example:

There’s three notes we can change, and (with the limiting conditions that we only use standard triads) not a lot we can do:

The fact that starting from a minor chord all the results are major is no coincidence, and the reverse (major chords turn into minor chords) is also true.

The moves downwards are a major third and the moves upward a minor third in the case of a minor chord, and vice versa for a major chord. Which means that if we move strictly in one direction, we get successions of major-minor thirds (and thus, fifths), which means we can reach any root, and can do the “change third” move to change between major and minor. Score!

Now this would be rather boring, but if we release our standard triads requirement, we can do a lot of other things. To give a few examples:

I’ll leave it to you to work out those examples in full.

This is what I came up with:

The last note (the Eb, which actually turn into a D# in the following context) is already the first repetition, which means every repetition it shifts up a minor third, to reach C again after three passes.

So what happens in the context of the two other voices (which start in the prime)? Here’s the complete score of all three voices, with four passes and a kind of ending:

Some of the chord names of the non-standard chords are open for discussion. To give a particularly striking example, take the G7/13 in bar 38: this could equally be seen as a F(m)7add9 or a Em9, but the  move to C suggest the G chord (unless you opt for a plagal cadenza, in which case you’d take the F7add9 interpretation, with the somewhat odd Gmin7 before that, hinting at lydian tonality).

So how does it sound?

I started implementing this with a guitar, a two-tap delay (e.g. Boss DD20, EHX SMM w/ Hazari) and found that it worked. 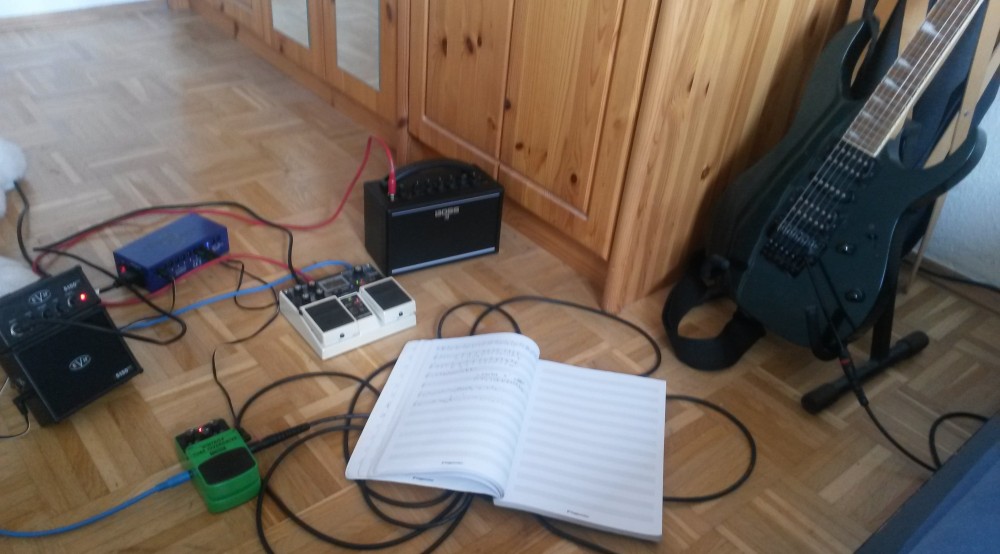 Next, I went to recording it:

This is a first and single take. Added processing included mainly an amp model (bx megasingle), some reverb (REVelation) and some oddity courtesy of the Eventide Eclipse.

A good question. First of all, this exercise shows in a very obvious fashion the relationship of counterpoint to harmony – after all, when looking at the three-voiced sheet music above, the immediate understanding would be that this is a sequence of chords, not a three-part polyphonic piece.

This approach also helps with the guitar staple of playing arpeggiated chords through a delay – and now, you have the tools to do that in a very sensible way. It actually gets much more interesting if you increase the number of taps from two to three!

And finally, this may also serve as a suggestion to look at the canon outside of the children and drinking song context.